Check out some of Team Sidney Enterprises’ projects below. 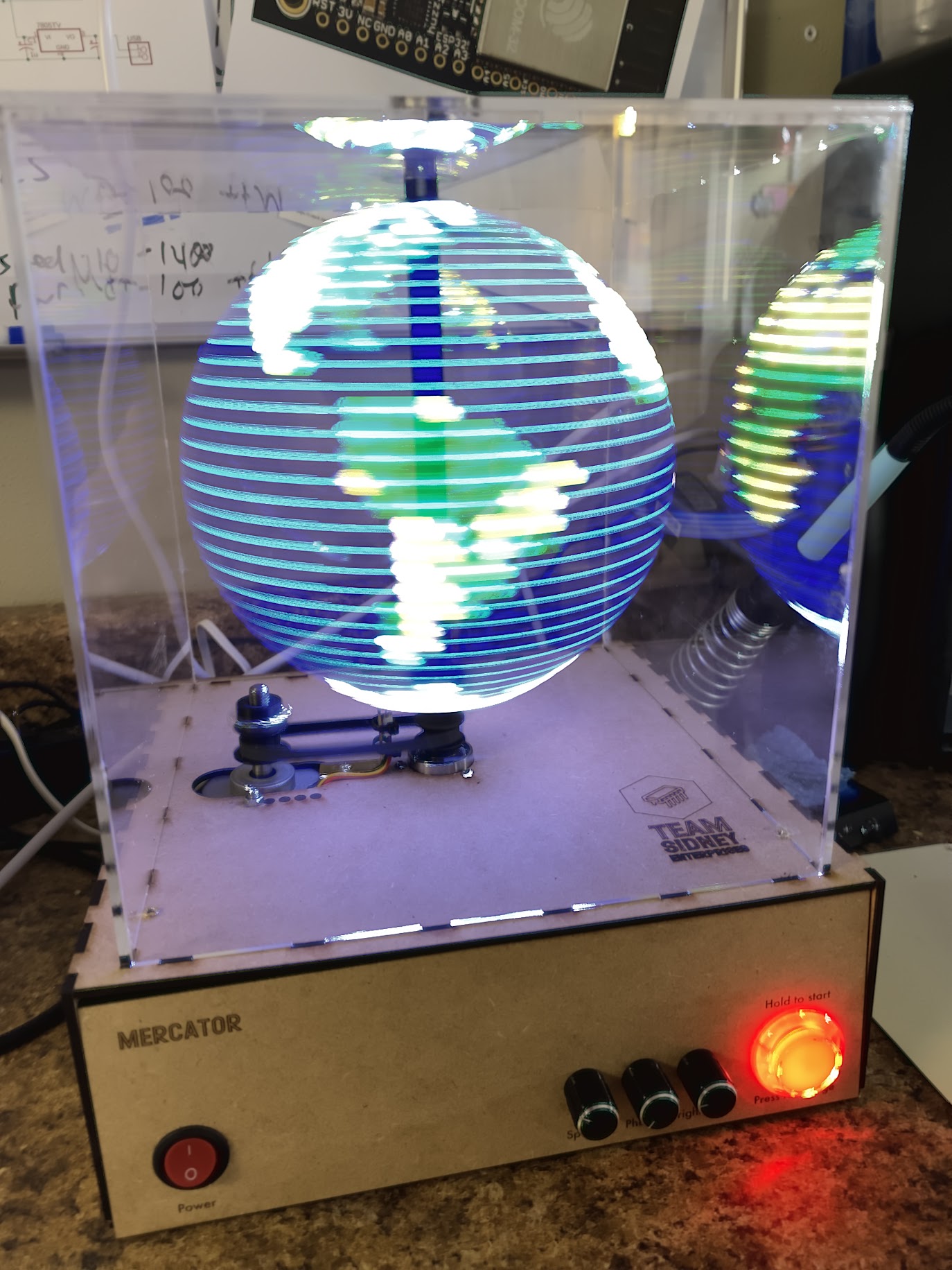 Mercator is a spherical persistence-of-vision display created with a spinning ring of DotStar LEDs, controlled via an ESP32 dev board. 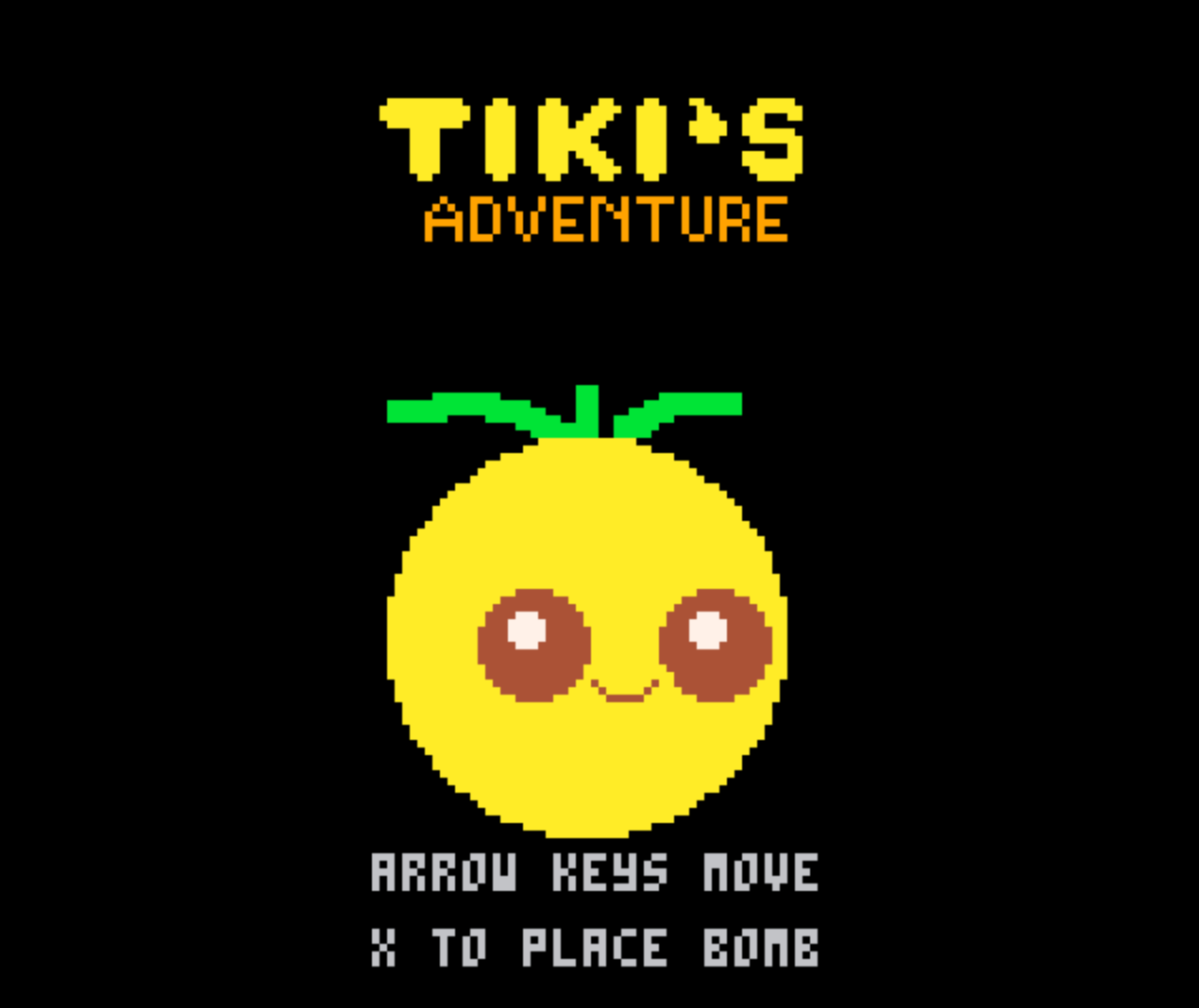 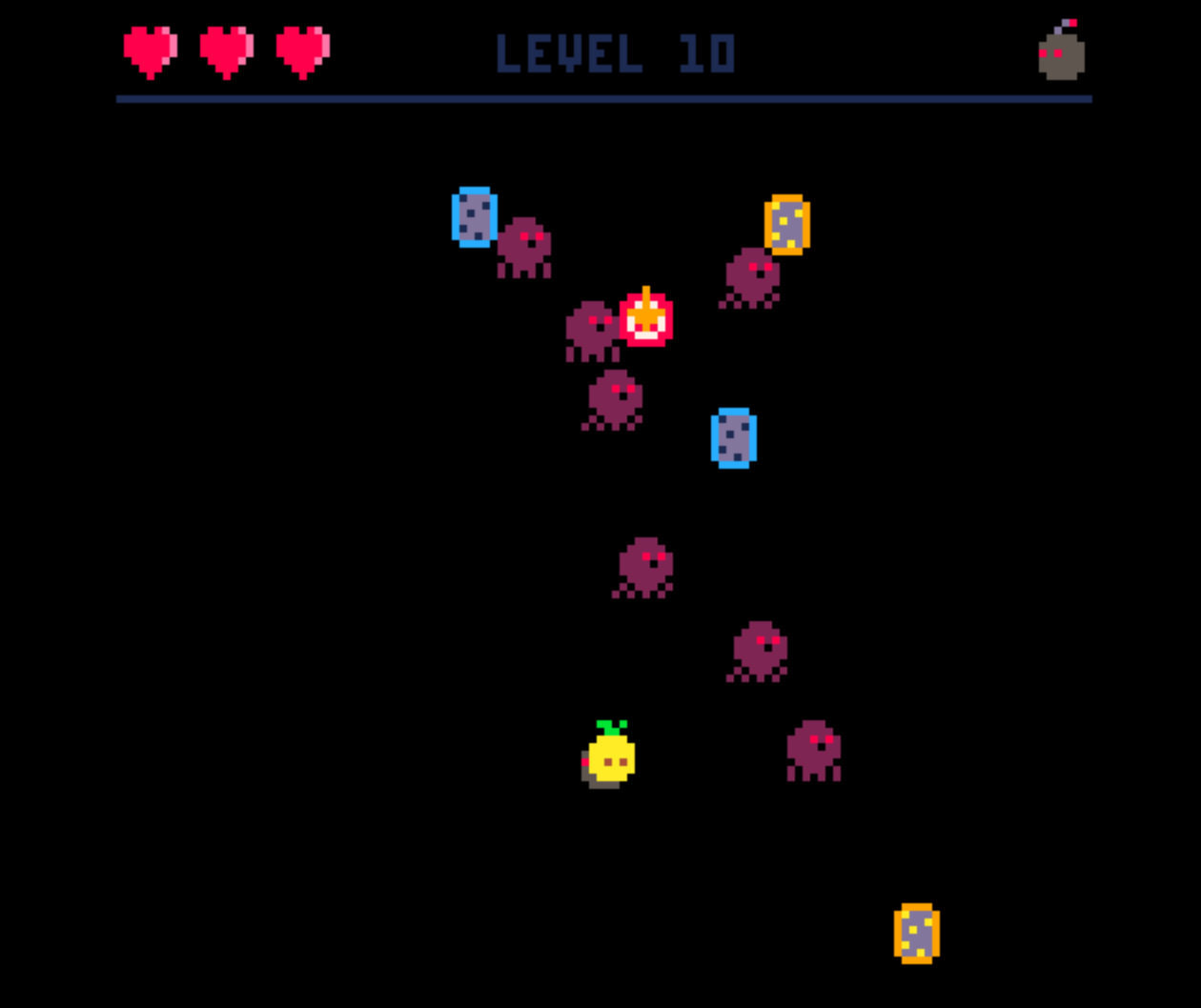 This is a quick game that I built for Theo using the PICO-8 virtual game console. PICO-8 lets you build simple, 8-bit games with a limited palette, sound effects, low-res graphics, and simple controls. = 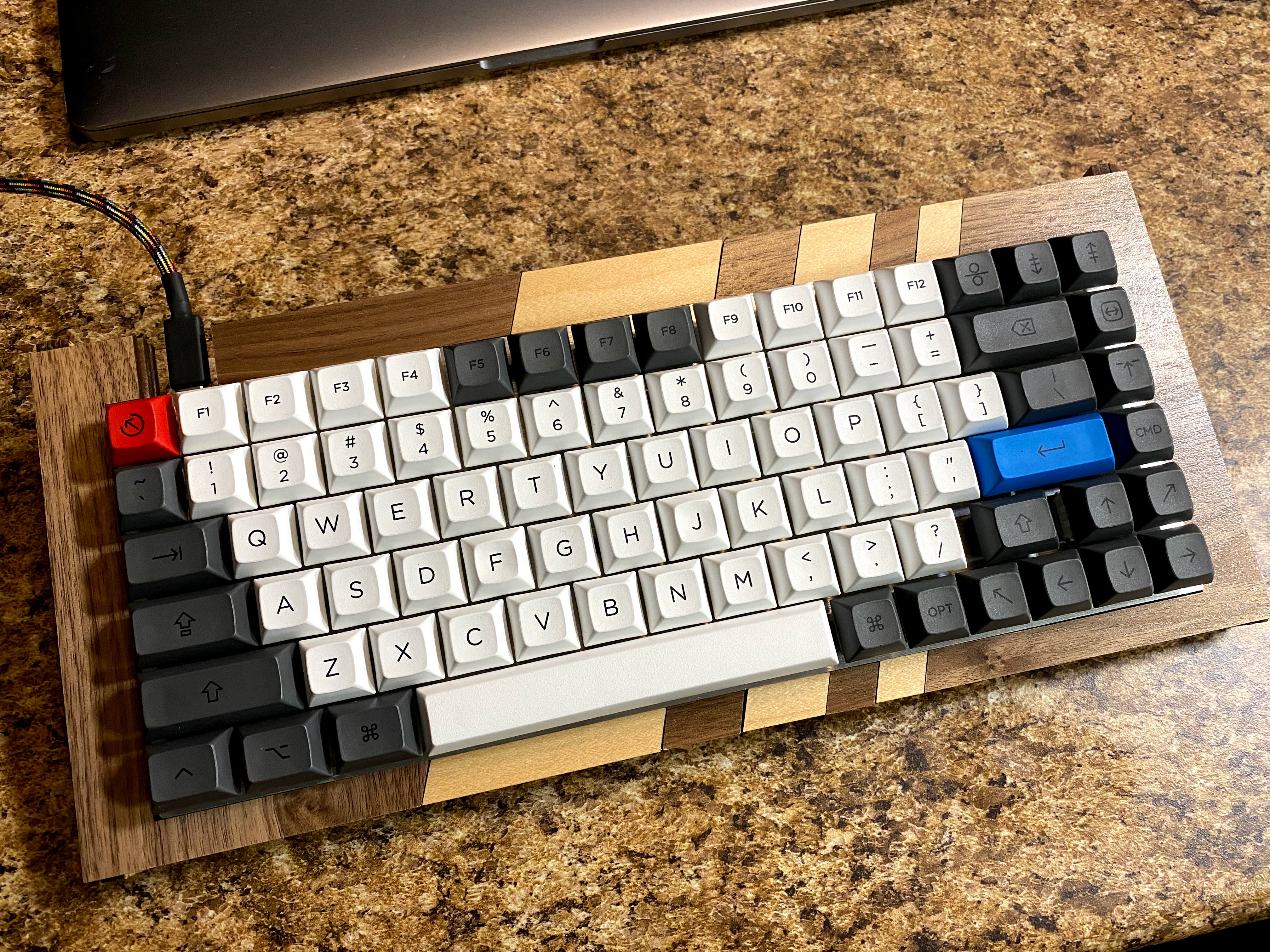 I built this keyboard around the kbdfans.com KBD75 PCB, using Kailh Box White switches. The case is my own design, laser cut using walnut, maple, and acrylic. It’s very clicky. 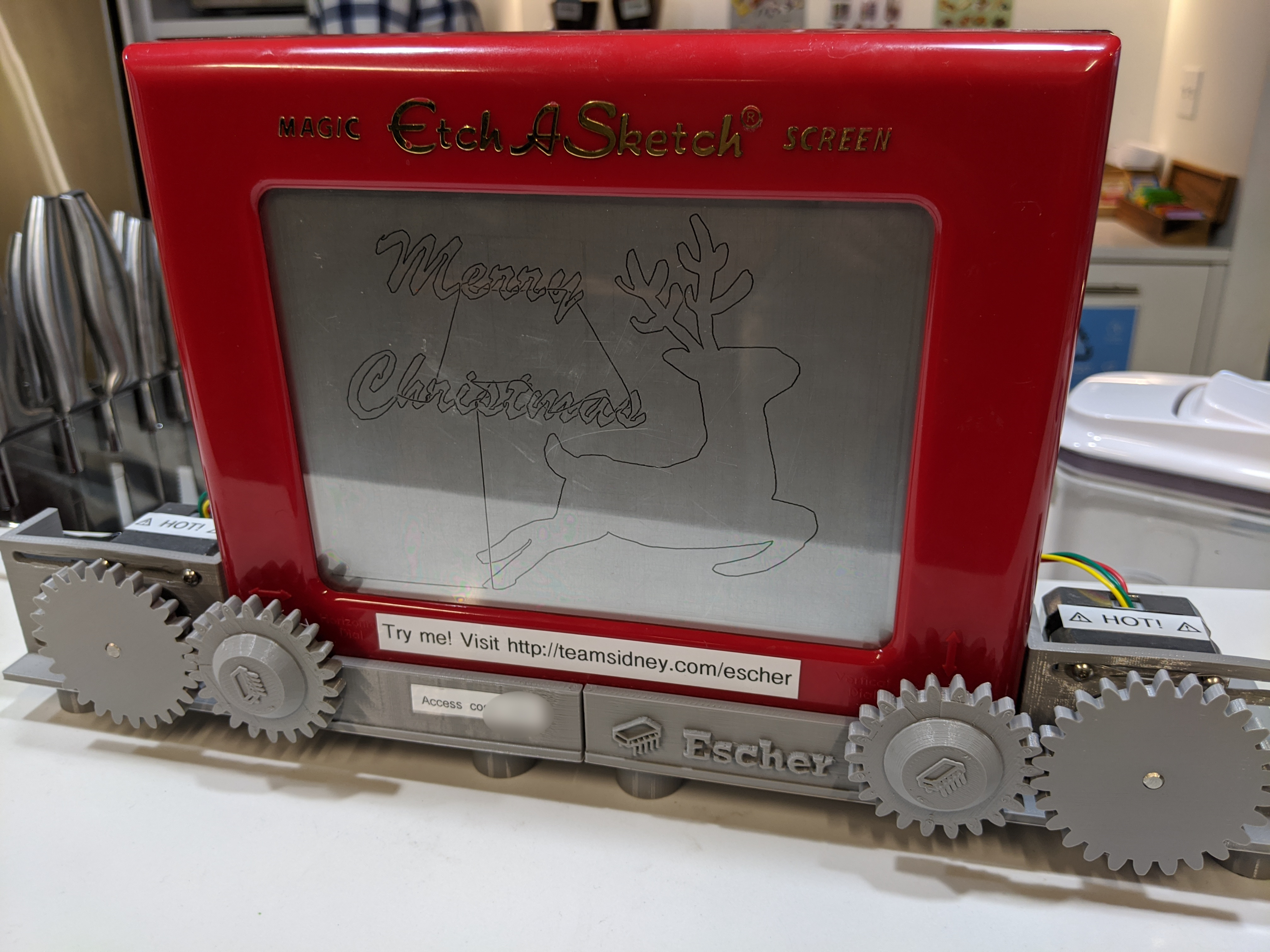 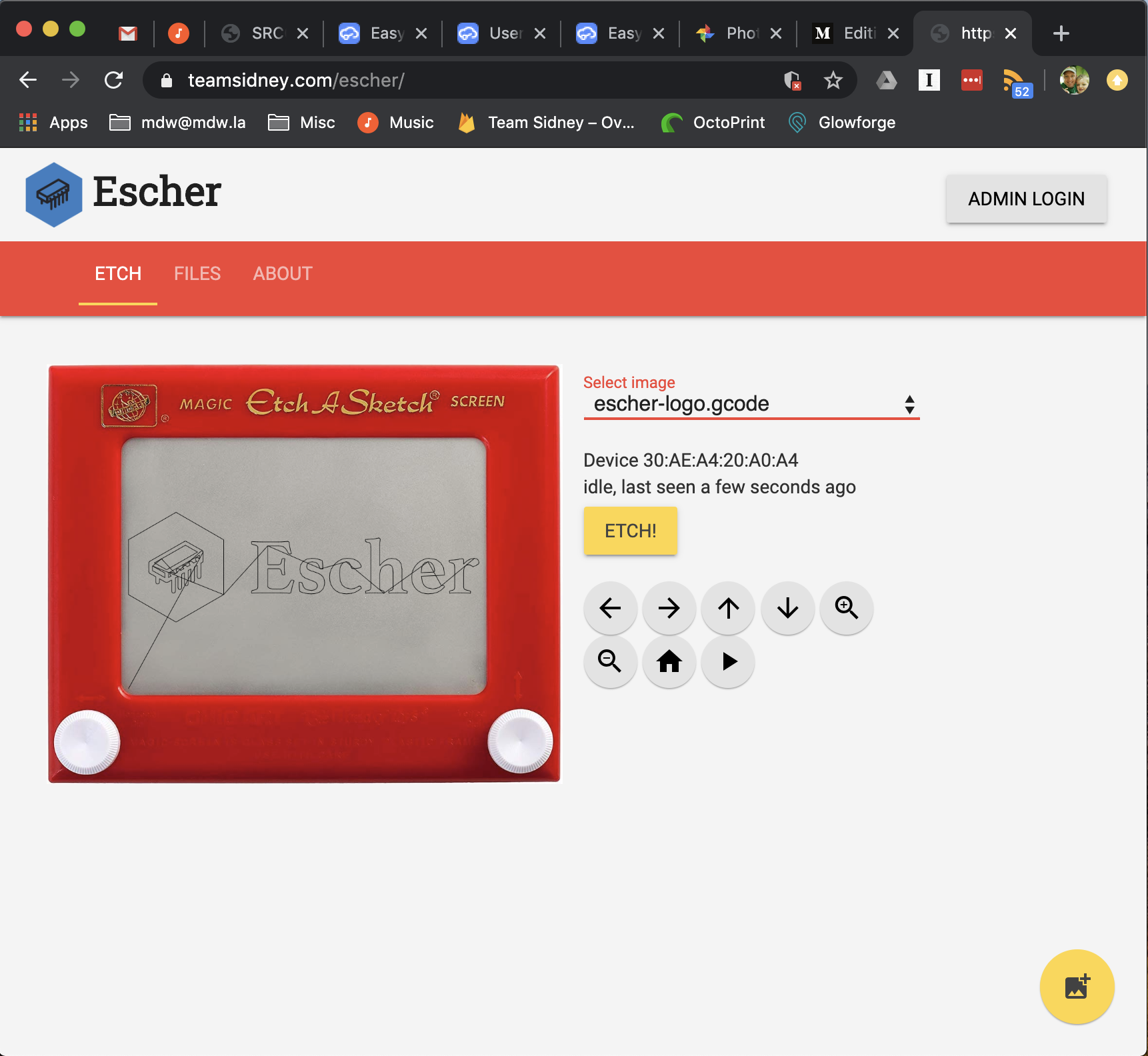 Escher is an Arduino-controlled robotic Etch-a-Sketch that uses Google Firebase to allow it to be controlled from anywhere in the world, using a web-based UI. 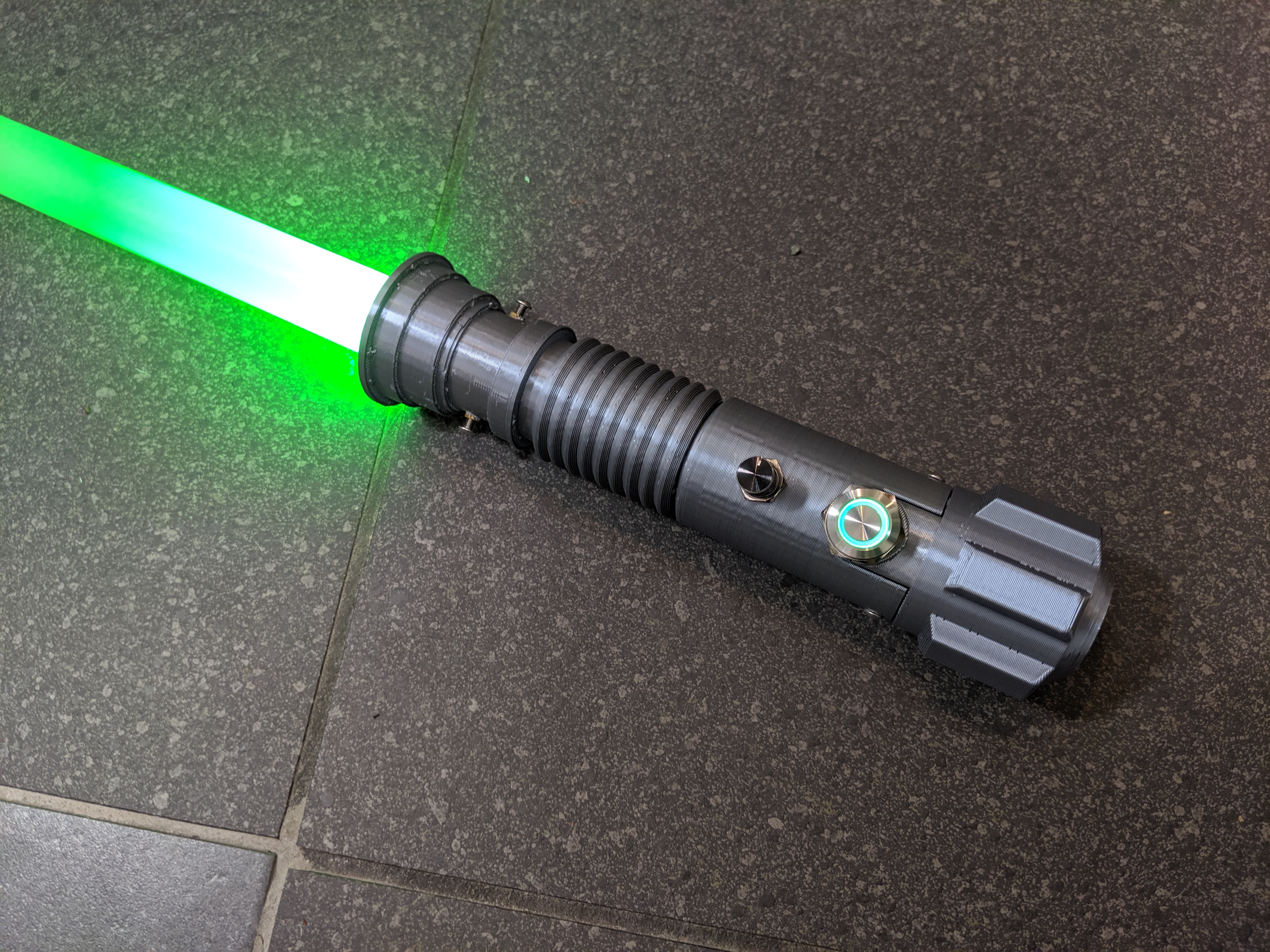 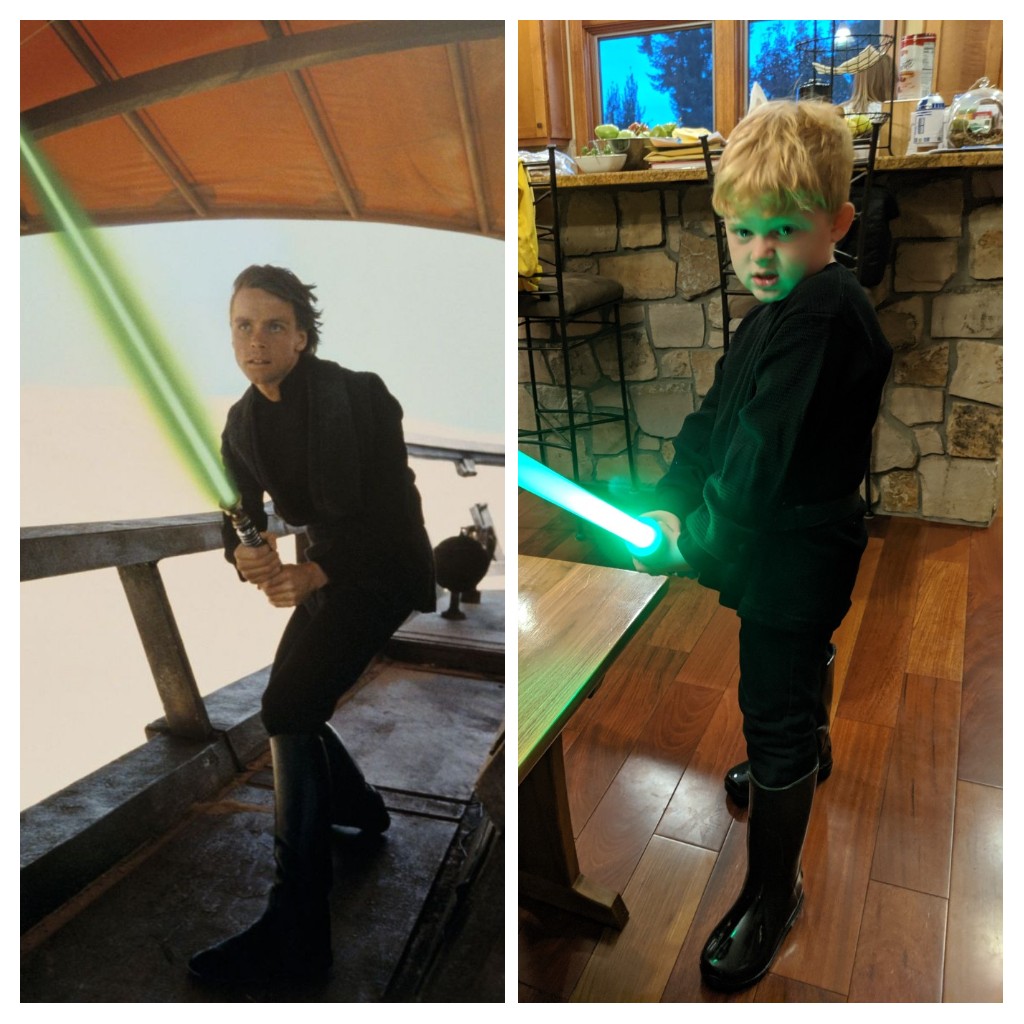 Theo’s Halloween costume for 2019 was to be Luke Skywalker from Return of the Jedi, so naturally, he needed a lightsaber. We designed and built this lightsaber, using a custom 3D printed handle, Luxeon Rebel LED module, and a plexiglass acrylic tube for the blade. 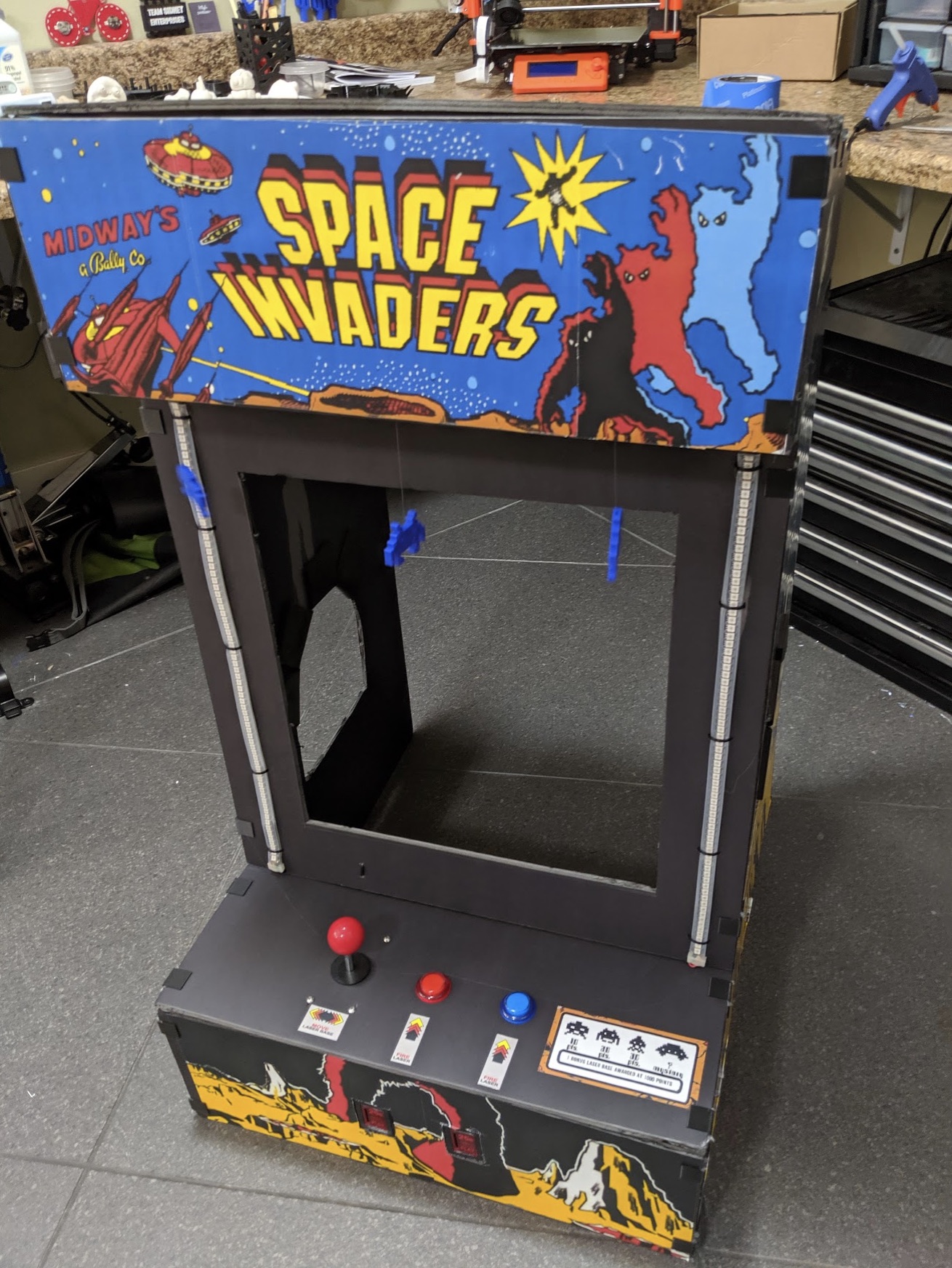 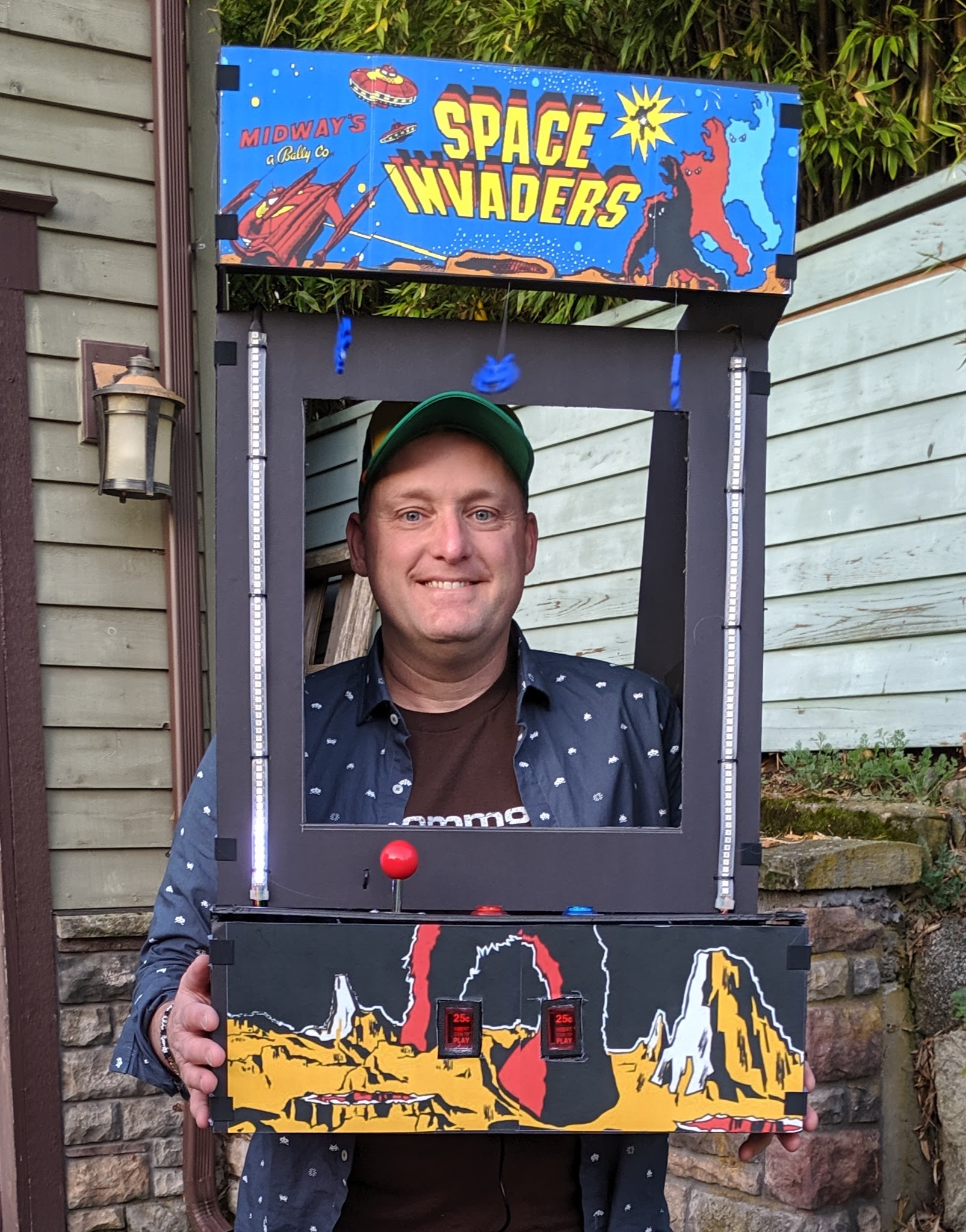 For Halloween 2019, Matt wanted to recreate one of his favorite video games of all time – Space Invaders. This is a wearable Space Invaders cabinet made out of foamcore board, using custom 3D printed brackets (designed by Sidney!) to connect the panels together. Two DotStar LED strips are attached to the side of the screen, programmed using a variant of Blinky to light up in various patterns. 3D printed Space Invaders figures dangle over the screen. The panels are decorated with vintage Space Invaders graphics printed onto laser-printable chemical labels, carefully overlapped onto the foamcore. Arcade joystick and buttons are on the control panel, although they are not functional. The coin slots are torn out of vintage coin slot keychains with a custom circuit to light them. 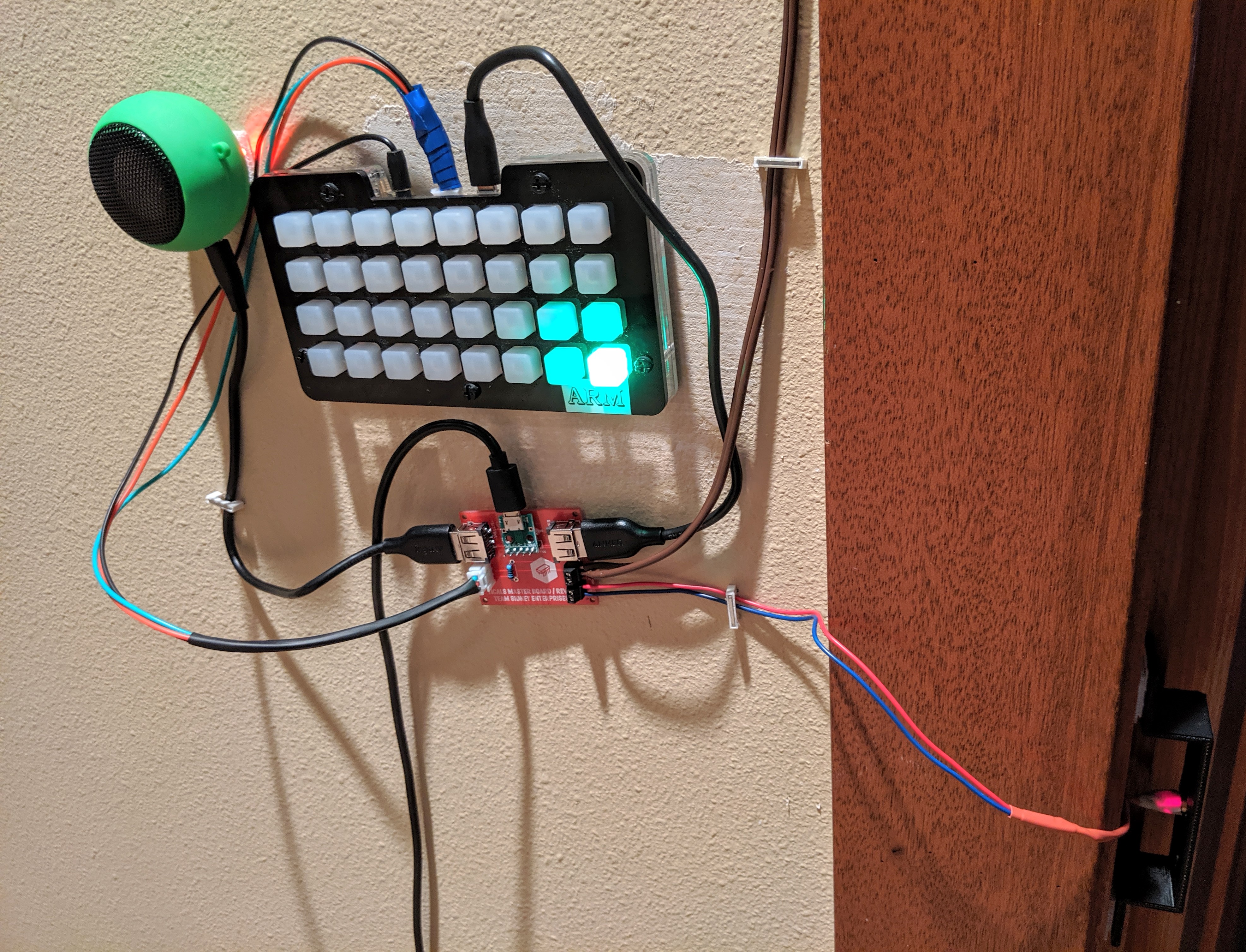 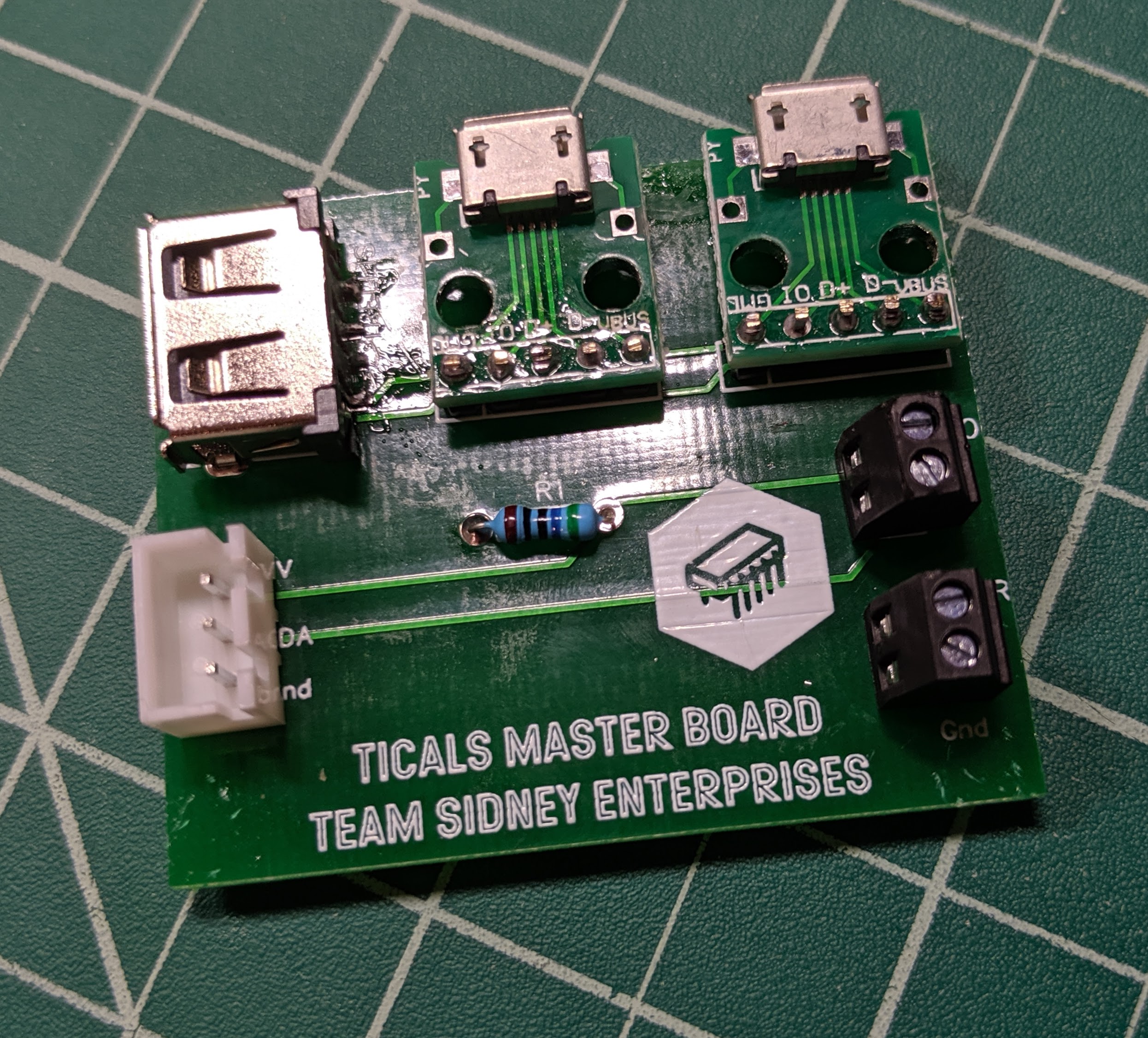 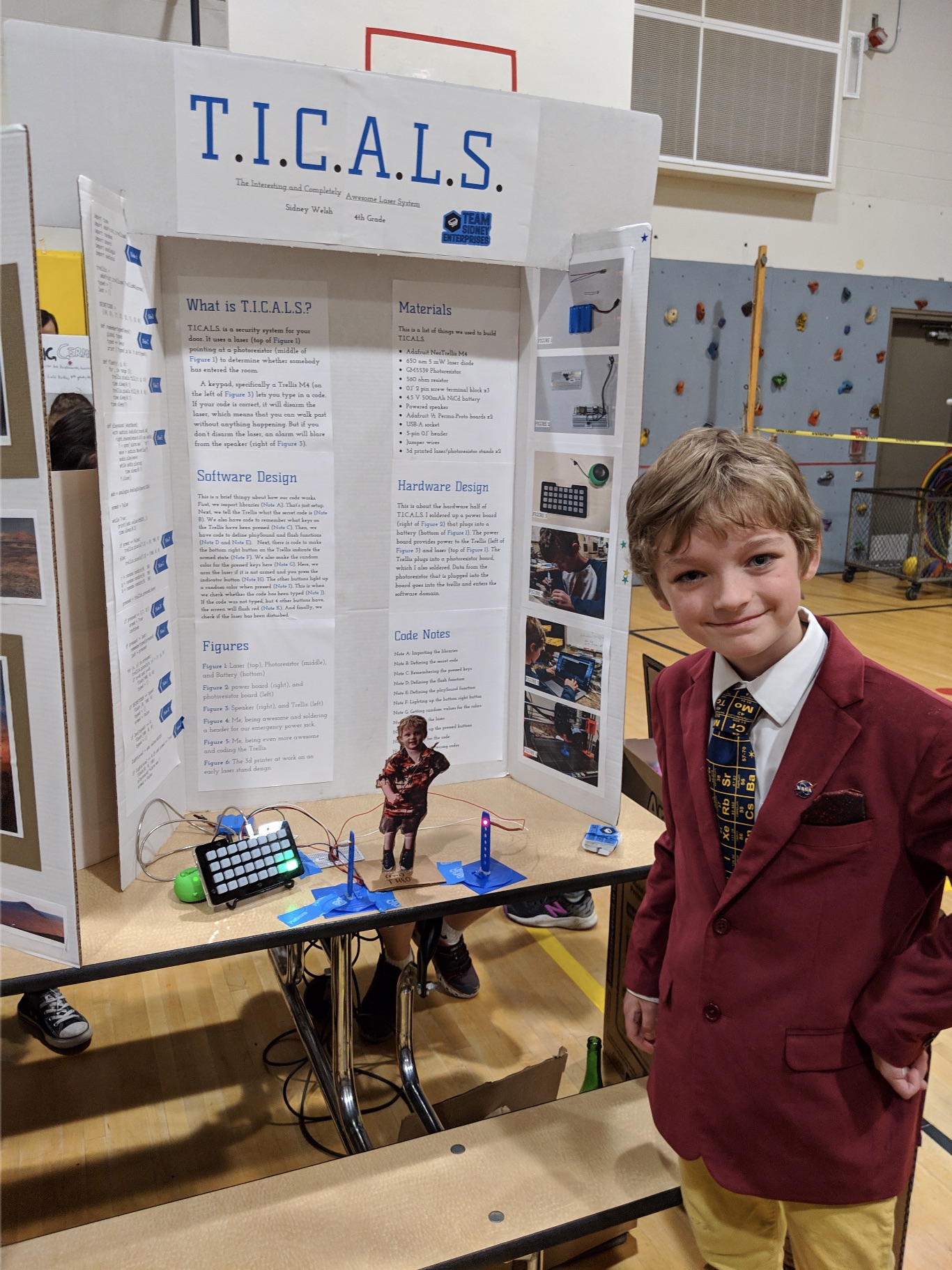 T.I.C.A.L.S. (The Interesting and Completely Awesome Laser System) is a security system for Sidney’s door based on a laser break-beam sensor and a NeoTrellis M4 board running CircuitPython. Sidney built this for his fourth-grade science fair project. A custom circuit board is used to route power from a USB charger to both the Trellis and the laser diode. A photoresistor mounted on the opposite side of the door detects whether the laser beam has been broken. When this happens, an audible alarm sounds. A security code can be entered on the Trellis keypad to disarm the alarm.

Blinky is a cloud-controlled, programmable home light display based on the amazing Feather HUZZAH32 developer board and DotStar LED strips, both from Adafruit. 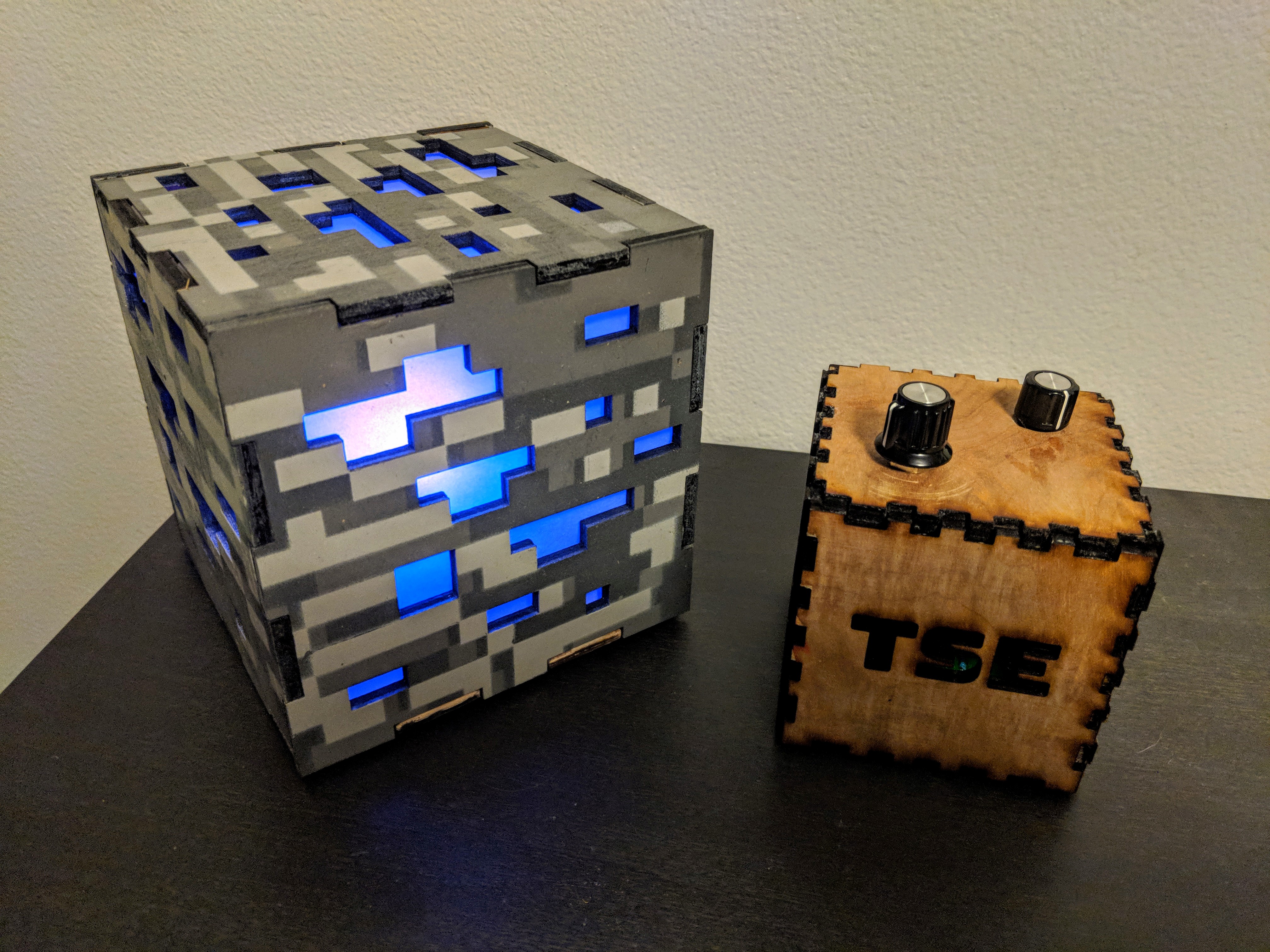 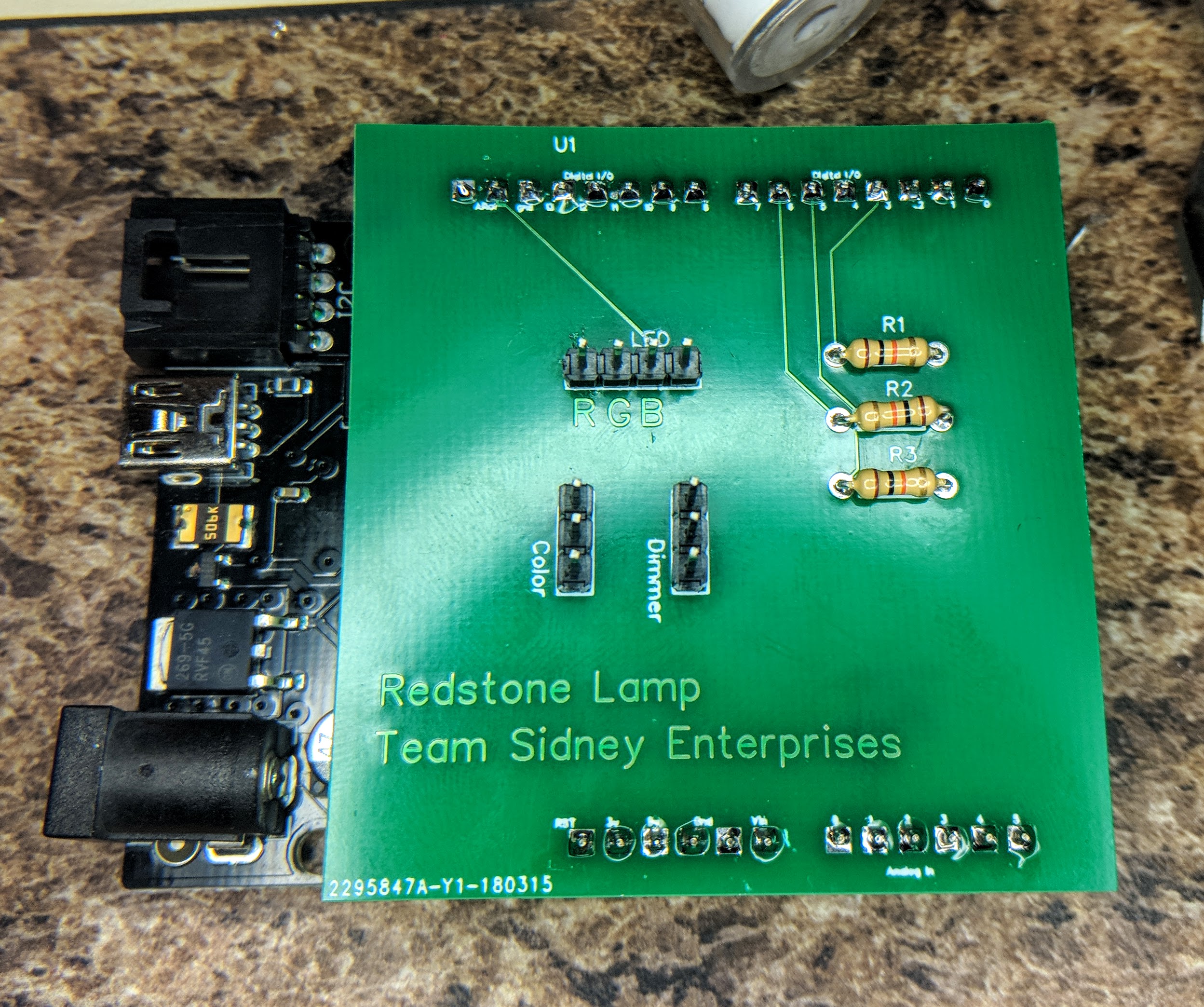 This lamp is based on a design from John Baichtal, author of Minecraft for Makers. It is a laser-cut plywood box, spraypainted with laser-cut templates. Inside is an RGB LED, controlled by a nearby control box containing an Arduino with a custom PCB shield and two pots: one to control the brightness, and another to control the speed of the color changing effect. 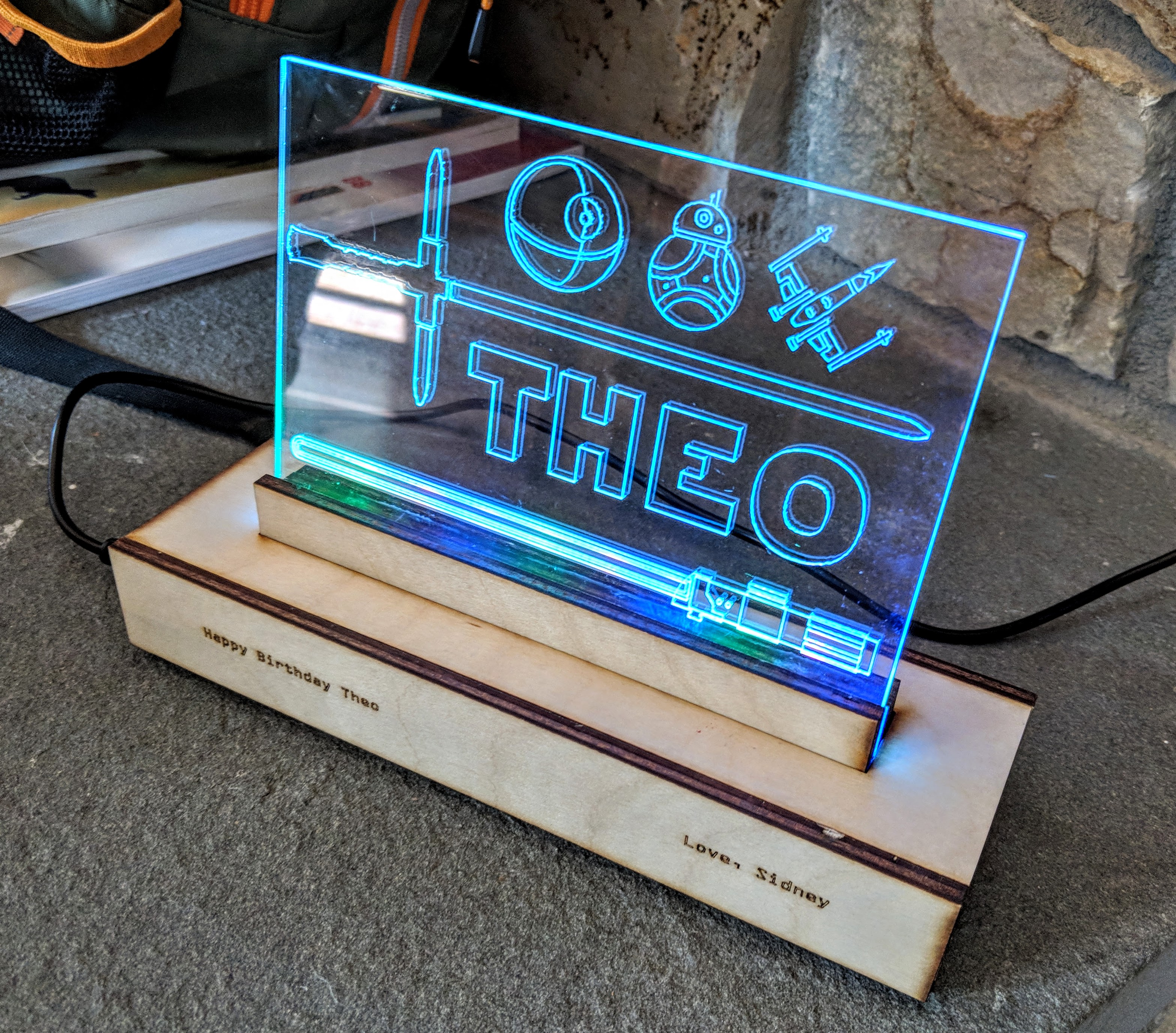 This was our quickest project – one day! It is a laser-cut wood base containing an RGB LED strip with a remote control. A laser-etched acrylic sheet sits atop the base and is lit from below.

This is a clock based on a Raspberry Pi mated with a Pimoroni Unicorn HAT HD 16x16 RGB LED display. It shows different images depending on the time of day, to help Sidney’s little brother know when he’s allowed to get out of bed in the morning.